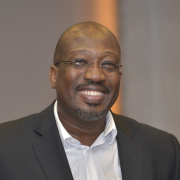 Professor Nana K. Poku is the Vice-Chancellor and Principal of the University of KwaZulu-Natal in which HEARD is based. He is a Political Economist with a research focus on the role of institutions (domestic and global) in health provision for the poor in Africa. Over the past two decades, his research on the political economy of Africa’s HIV and AIDS epidemic has been amongst the most influential on the subject. Within the context of the World Health Organisation’s global aim to treat three million persons living with HIV and AIDS by 2005, he directed operational research for the World Bank funded Treatment Acceleration Programme (TAP) to test the feasibility of complex medication scale-up in resource limited settings.

Between 2003 – 2006 Professor Poku was tasked by then Secretary-General of the United Nations, Kofi Annan, to lead the Commission on HIV/AIDS and Governance in Africa (CHGA) at the Economic Commission for Africa. CHGA pioneered a range of impact studies on the effects of HIV and AIDS on state structures and economic development in Africa, and assisted governments to consolidate the design and implementation of policies and programmes to mitigate the effects of the epidemic.

In 2007, Professor Poku was an expert witness to United States Congressional Committee on the President’s Emergency Plan for AIDS Relief (PEPFAR). During 2006 – 7, he was a member of the Expert Advisory Group to the EU Africa Governance Project, and from 2007 to 2010, he also served as a Special Advisor to British Government (Cabinet Office of Prime Minister) on Africa. Since 2007, he has been Senior Advisor on HIV/AIDS policies within Poverty Reduction Strategy Papers for a number of African countries, and over the past 15 years has worked in various capacities with the World Health Organisation, World Bank, United Nations Development Programme, UNAIDS, International Labour Organisation, European Union, African Union, African Development Bank, Southern African Development Community, Organisation for Economic Cooperation and Development, and various national development agencies, among others. He has led 19 country programme appraisal missions in 16 countries in Africa.

Professor Poku has a wide array of published work on globalisation and security; HIV/AIDS epidemic in Africa; global health; governance; migration and human security. He has published 15 books, over 30 book contributions and more than 20 peer reviewed articles in internationally recognised journals, including International Affairs. Review of International Studies, International Relations, and Third World Quarterly. He has guest co/edited journal special issues for International Affairs on HIV/AIDS and Governance (2006); Third World Quarterly on Global Health (2002) and the Millennium Development Goals (2011) and International Relations on the Crisis of HIV/AIDS in Africa (2000). He is also editor of three Ashgate book series: Contemporary African Politics; Global Security in a Changing World; and Global Health, as well as Zed Books Rebels series. He is currently working on a variety of research projects, including issues around security and development, globalisation, African politics, and HIV and AIDS.

Professor Poku was formerly Pro-vice Chancellor of Research at University of Bradford where he also served as Dean of School of Social and International Studies. Prior to Bradford, he held senior faculty posts at Universities of Southampton and Nottingham Trent, UK.

Why Doesn't the Decriminalisation of Same-Sex Sexuality and Sex Work Ensure Rights? The Legality and Social Acceptance of Transgressive Sexualities in Urban Mozambique.

Poku, N (2016) From exceptionalism to the challenge of ending AIDS by 2030 HEARD, Durban, South Africa